Graphic Novels and Comic Books are getting bigger every day. Plenty of summer blockbusters feature spandex-clad heroes, and even lesser known properties are getting snapped up and turned into films. There’s never been a better time to get into comics. Unfortunately, with all the material out there, a lot of people just don’t know where to start. The Comics Casual is a 6-part series that will give you the basics on getting into comics without getting lost between the pages!
If you’ve read these articles, and you’re now screaming “Just tell me what comics to read already, nerd!” That’s a little rude, but I understand the impulse. Here are 10 Non-Superhero Comics to Get You Started.
With these books I specifically chose comics that are easily accessible, popular, and have a definitive ending. One or two of them are ongoing series, and some of them are quite large, but their accessibility is enough to trump that. I’ve also picked a genre or category for each one to get some variety. Please note that I have not read all of these titles, nor are they my personal favorites. Some of them contain material that is triggering or unsuitable for children, so I’ve rated them and noted the type of content at the end of each review. 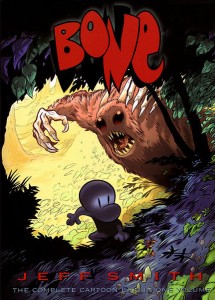 “All ages” shouldn’t just mean “for kids”. This is a great epic adventure that’ll suit almost any age or temperament. It’s got funny-looking cartoon characters, dragons, hilarious gran’mas, scary villains… everything to tell an epic story. Compared, not unfavorably, to Tolkein’s Lord of the Rings. There’s a massive collected edition if you want to feel like you’re reading an epic door-stopper, or colored Scholastic Volumes that are more kid-friendly.
Rating: All Ages – Some of the villains could be frightening to young children, some dialogue talks about dismemberment and being eaten, and several characters die, but the violence depicted is mostly cartoonish. 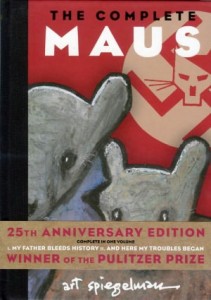 The only Comic to win a Pulitzer Prize; educational; moving; gripping; when people say comics are art, this is what they’re talking about. This is Speigelman’s most accessible work. It’s not just a story about the Holocaust, it’s also about Speigelman relationship with his father. If you want a work that’s readable again and again, or you want to convince your friends that comics are both art and literature, this is for you.
Rating: PG-13. Dialogue references some truly horrific acts, and the 2nd volume depicts a survivor’s account of the Auschwitz-Birkenau concentration camp. No worse than that of a documentary on the subject. 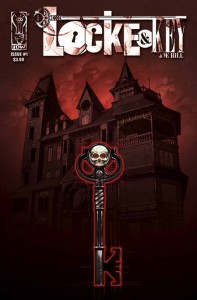 Joe Hill(son of Stephen King) combines classic horror tropes – a family secret, magical items, an old house, children in danger, and ancient evil – into something wholly original and new. Gabriel Rodriguez’ art balances whimsy and terror magnificently. Spooky stuff, and a must-have for any horror aficionado.
Rating: 18+. Very disturbing imagery, both surreal and real. An on-panel rape takes place in the first volume and there are several times where characters are violently assaulted or murdered. Body horror is common in this book as well. 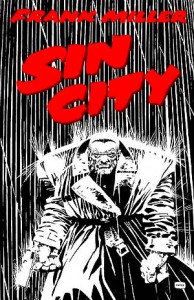 If you like your Noir gritty, this is your mouthful of sand. The eponymous Sin City is home to every noir trope in the book – stone cold killers, dangerous dames, corrupt cops and politicians… and blood by the bucketful. It borders on cliché multiple times, but something about some of those lines still makes the hair stand up on your neck.
Rating: Definitely 18+. This series is defined by bad people doing horrible things to each other. It would be quicker to list violent or sexual acts that aren’t depicted in this series. The list is: none. Oof. 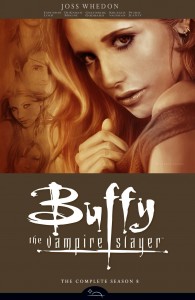 This Dark Horse comic actually picks up where the TV show ended, with a world full of Slayers and Sunnydale destroyed. Actually written by former Buffy writers (Joss Whedon, Drew Goddard and Jane Espenson) as well as a few other comic superstars (Brian K. Vaughn and Christos Gage), it still manages to capture the themes and voice of the classic TV show. It even has several spin-offs for other characters like Spike, Angel, Faith and Willow. Currently running is Season 10, but Season 8 and 9 are available in collected volumes. Be aware: This is a Dark Horse series and thus is unavailable on ComiXology – you’ll have to buy digital versions through the Dark Horse online store or app.
Rating: 15+. Chop-Sockey style violence with some blood. Discussion of sexuality and occasional partial nudity. The usual Buffy stuff. 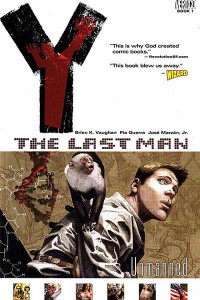 The High-Concept Pitch for this reads like a classic Twilight Zone episode: “A plague wipes out every male on the planet except one.” Yorick, a failing street magician, and his monkey Ampersand team up with Agent 355… and why haven’t you gone out and bought this yet? Written by Brian K. Vaughn and illustrated by Pia Guerra. This series is chewy socio-political thriller center wrapped in delicious globe-trotting action-adventure coating.
Rating: 18+. Mostly for nudity and sexuality, but there’s also a good deal of violence and swearing. 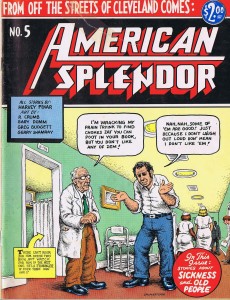 This is the story of a cranky old man and his average, average life in Cleveland, Ohio. This is more like six cakes of life all cut into many slices, but it’s all worth checking out. Harvey Pekar was a huge name in Alternative Comix (This is a thing, look it up) and was even brought to the silver screen. This is worth checking out purely for its importance in comic history.
Rating: 13+ For swearing, some dated stereotypes, a small amount of nudity and violence. To be honest, I don’t think anyone under 13 would even “get” this book. 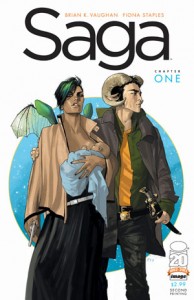 This series could almost be in the WTF category, but its heart beats a timeless tale of Star-Crossed Lovers. Alanna and Marko are two soldiers from opposite sides of a never-ending intergalactic war who fall in love and have a child. The description hardly does justice to the series; the show mixes the horrors of war with the tenderness of parenthood as fluently as it mixes hard science fiction with fairy-tale whimsy.
Rating: 18+ Graphic sex and nudity, bloody violence and foul language. All alongside cutesy cartoon animals. Confusing. 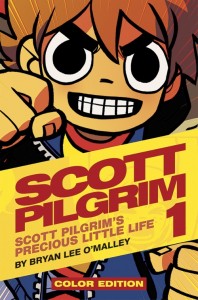 “But Joseph,” You declare, “You already did a Tie-In Comic!” Well, gentle reader, the truth is, Scott Pilgrim was a comic book long before it became a film! The wind-up of the story is essentially the same; lovable loser Scott Pilgrim falls for Ramona Flowers, a mysterious American girl. But if he wants to date Ramona, Scott has to do battle with her seven evil exes! This series has a goofy, fun tone using video game and music tropes to tell a story about dealing with baggage from previous relationships. Some of the funniest lines ever committed to word balloons. A highly recommended read.
Rating: 13+ For light language, cartoon violence, dialogue about sex and some partial nudity. Still tamer than the movie adaptation.

10. WTF: The Invisibles by Grant Morrison and Various Artists 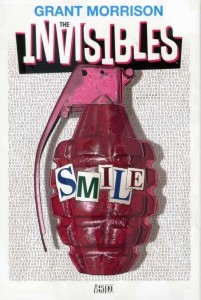 This series posits a simultaneously frightening and hilarious concept: What if every single conspiracy theory was true? From psychic warfare to AIDS vaccines to shamanic magic, this series gets really, really weird, in the best way possible. The audience sees through the eyes of Dane McGowan, also known as Jack Frost, as he joins The Invisibles, a rag-tag group of magicians, psychics, and assassins. These would-be heroes fight The Outer Church, the puppet masters of the entire universe who are hell-bent on mind-controlling the human race.
Rating: 18+ For violence, nudity, sex, rape, torture, mutilation and grotesque physical transformations of people into monsters.
So there you are! Ten comic books or graphic novels to get you started on. Buy them in stores or online. And keep an eye out for The Comics Casual, Part 5: 10 Webcomics for New Readers.