During the summer and winter of 1871, the band of Sioux to which I belonged a clan of the Wah petons, or “Dwellers among the Leaves” – roamed in the upper Missouri region and along the Yellowstone River. 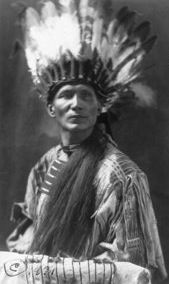 In that year I tasted to the full the joy and plenty of wild existence. I saw buffalo, elk, and antelope in herds numbering thousands. The forests teemed with deer, and in the “Bad Lands” dwelt the Big Horns or Rocky Mountain sheep. At this period, grizzly bears were numerous and were brought into camp quite commonly, like any other game. We frequently met and camped with the Hudson Bay half-breeds in their summer hunt of the buffalo, and we were on terms of friendship with the Assiniboines and the Crees, but in frequent collision with the Blackfeet, the Gros Ventres, and the Crows.
However, there were times of truce when all met in peace for a great midsummer festival and exchange of gifts. The Sioux roamed over an area nearly a thousand miles in extent. In the summer we gathered together in large numbers, but towards fall we would divide into small groups or bands and scatter for the trapping and the winter hunt. Most of us hugged the wooded river bottoms; some depended entirely upon the buffalo for food, while others, and among these my immediate kindred, hunted all kinds of game, and trapped and fished as well.
Thus I was trained thoroughly for an all- round out-door life and for all natural emergencies. I was a good rider and a good shot with the bow and arrow, alert and alive to everything that came within my ken. I had never known nor ever expected to know any life but this. In the winter and summer of 1872, we drifted toward the southern part of what is now Manitoba.
In this wild, rolling country I rapidly matured, and laid, as I supposed, the foundations of my life career, never dreaming of anything beyond this manful and honest, unhampered existence. My horse and my dog were my closest companions. I regarded them as brothers, and if there was a hereafter, I expected to meet them there. With them I went out daily into the wilderness to seek inspiration and store up strength for coming manhood. My teachers dreamed no more than I of any change in my prospects. I had now taken part in all our tribal activities except that of war, and was nearly old enough to be initiated into the ritual of the war-path. The world was full of natural rivalry; I was eager for the day.
More Tomorrow!