A Message For You

By Vital Thebeau
CHAPTER 15
My mother and father were very smart; they didn’t have a lot of education. They could write English or French (not a whole lot). They could do whatever they needed because they had to order their materials they needed for the shop and the store. Mother was taking care of the little grocery store.
I remember they used to buy the molasses in a 95 gallon barrel. We were selling that by the gallon, and sometimes in the winter time the molasses would get cold and it would take a long time to fill a gallon jar.
I remember doing the sugar ration. They had to have stamps for sugar, because of the ration; you were only allowed so many pounds per month or week. I don’t quite remember, but one thing I do remember there were a lot of different colours of stamps for different things, and they had to be glued on a sheet of paper. I was only 15 years old at that time. 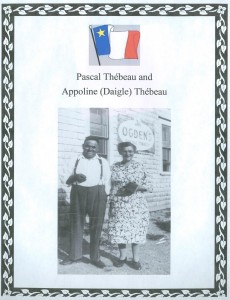 My older brother Leonard joined the Army at the age of 17 and he went overseas. I don’t remember how long he stayed overseas, but I know that he stayed until the war was finished.
During that time my mom was very worried about him. He was one of the lucky ones because he came back.
The other boys were older than Leonard. My brother Raymond was called to go, but he didn’t pass the medical test. The rest of them, I am not sure what happened, but they didn’t go to the army.  I know one of my neighbours did not want to go, he was hiding somewhere, nobody knew where he was hiding so he managed to skip going to the army. There were a few people that didn’t like to go to the army but they were calling you and you had to go for medical tests and if you passed you had to go. 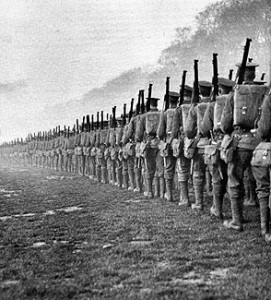 They couldn’t all go; somebody had to stay to work on the farm or somewhere else. My brother Raymond went to Saint-Louis the Kent and started a blacksmith shop at that time. There were a lot of horses that needed to have their feet trimmed or new shoes put on.  He did that for a year or two. He had taken some of dad’s tools.
One day it was snowing a lot and when there was a storm, nobody would come to the shop. Dad wasn’t doing too much so he would take a day off. When he did that it would give me a chance to work in the shop. That day I decided that I would make a hammer for shoeing horses. I had an idea how it was made. I looked at a carpenter’s hammer and I went from there. I had to have a piece of steel big enough to make the hammer.
I had to make that piece of steel around 2 inches by 1 inch and a half wide, so I cut my piece of steel. It had to be a special hammer, the horn had to be a little straighter than a claw hammer, so I started with a piece of steel of a wagon axle which was about 11/4 inch square same as the punch.  I started the forge fire, so I could heat the piece of steel. I wasn’t quite sure how to start the fire. I had to heat it enough to make it bigger than it originally was. 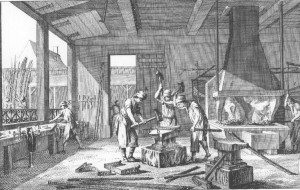 Once it was hot enough, I put it on an anvil so I could shrink it big enough for what I wanted. I had to make a hole for the handle, so I had to make myself a punch to make a hole because we didn’t have a drill for steel.
I had to heat my piece of steel hot enough so when I took the punch it would start to make a dent. I started on one side then turned it over to do the other side. I had to do it two or three times before the punch would go through the steel. I had to keep heating the steel all the time because when it got cold I couldn’t do anything with it.
Once I had a hole through the steel then I would heat the steel really hot again. I put the punch in the hole again and I would hammer the steel so the hole would be the same shape as the punch. I had to put the handle in the hole. Then I had to shape the horn so I made myself a chisel so I could cut the horns on the hammer the way I wanted it done. 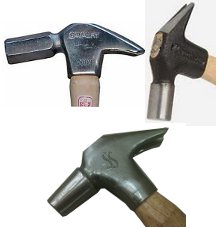 I had to shape the horn on the hammer like that. The horn is very important because it has to catch the nail especially when you’re shoeing horses. Those nails are made especially for nailing the shoe on its foot.
After I had it all shaped I had a file so I took the file so I could take all the hammer marks off. It took me a fair amount of time to do that, but it really looked good. When my brother Raymond came back from Saint-Louis de Kent I showed him the hammer I had made for him.
He looked at it and he asked me how much it cost, and I told him seven dollars, and he looked at it again. And then he put it away. My mother told him that I had made that hammer and he took it again, and started scoping it to see if he could find some fault with it. He couldn’t believe that I had made that hammer. I wish I had that hammer today it was fun doing that and now it’s hard to explain how to make such a thing. I hope you enjoyed this story about making a hammer. 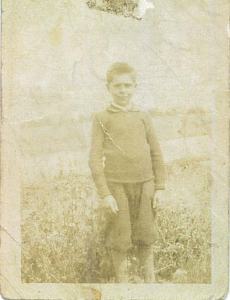