A Message For You: Chapter 10

Recipe for making poutine rape: it’s a recipe that was brought down from the early settlers, it’s made with potatoes and pork meat that is be cut fairly small 3/8 to 1/2 inch square. The amount of potatoes is roughly 12 big potatoes.
We would peel them, and then grate them; we would put the grated potato in a bag that we made with cotton cloth. It was about 7 inches wide and about a foot long. Then we would squeeze the grated potatoes to take the excess water out so it would be fairly dry.
We would take about 8 big potatoes to be cooked by boiling them and then mashing them. Then we would mix them together about one third of cooked potatoes with the grated potatoes. It has to be mixed really well. If you put too much cooked potato in, it would make them too soft.
Once they are mixed together, add some salt. You make a ball about 3 inches in diameter then you make a hole in the ball with your thumb, make it big enough to put the meat in. 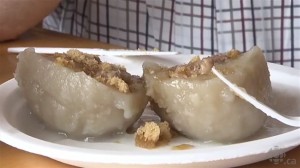 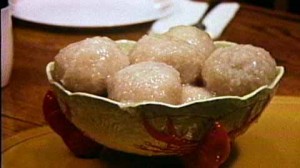 Then you cover the hole by using the potato that was in the hole making sure the hole is covered up really good. That should make about 12 poutines.
Then you would need a pot to hold one and a half gallons of boiling water and you put them in gently.
You cook them for two hours, but it shouldn’t boil to hard, just enough to keep the poutine off the bottom of the pot because they may stick.
We eat them with a little bit of white sugar, it is very delicious trust me!