A Message for You: Work in the Woods, Cards at Night.

CHAPTER 17
By Vital Thebeau
1946
I remember my brother Eddy was cutting pulp wood it was called poplar.
In the summertime it was very hot and there were a lot of mosquitoes. My job was to take the bark off the trees with a tool called a spud. It was very hard for me because I was only 15 years old and my brother Eddy was quite a bit older, he was 27. He was a hardworking man.

He had 15 or 20 trees cut down ahead of me; I wasn’t able to keep up with him. I was so tired and so disgusted that I was crying at times, sometimes he would stop cutting down the trees so I would catch up to him. I would take a break for a few minutes, then we would go back to work again. We had to take the pulp to the main highway with a tractor that we made with a 1928 Studebaker. We also had a trailer that we had made ourselves. We had to make a road from the highway to where we piled the pulp so we could load it on the trailer; it was a very hard job.
We did not have a power saw, we had to use what we call a buck saw and that wasn’t run by gas. We had to use our muscles which were hard on our body. When we did a day’s work, we did not feel like doing much that evening. We would cut one cord of wood a day or sometimes we would cut up to two cords a day, it would depend on the stand of trees. 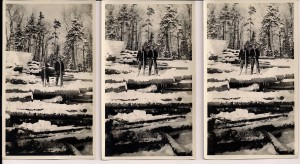