CHAPTER 12
1943
That winter we had a lot of snow!
If you had to talk to someone you would have to walk over to their house because there was no telephone.
A neighbour of ours, her name was Alma Robichaud, was having a baby and she was having problems, my mother was a midwife at that time. My Mom sent word to us that they needed a doctor. Someone had to walk about one mile to let us know they needed a doctor as soon as possible. The closest doctor was in Rogersville NB, 1910 10 miles away, it was an emergency. 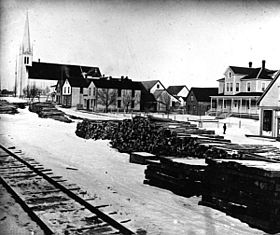 They told my Dad what was happening, Dad told Raymond to harness the horse as fast as he could and go get the doctor. The sleigh was off!They didn’t know for sure if the doctor would be there or not, there was no way to know but go over and pick him up and bring him back to the house. All they could do is hope that the doctor would be there.
It was a 20 mile round trip. It took him two hours or so, everybody was quite happy to see the doctor arrive. They were very lucky the doctor was there. If the doctor would not have been there they probably would have lost both the mother and the baby. He had to hurry as much as he could. He went directly to the house then he brought the horse back home.
When he got home, I brought the horse in the barn and I took the harness off. I took some straw and I rubbed him down because he sweat a lot, then I had to feed him and give him some water to drink. We had a horse blanket so I put it on him so he wouldn’t cool down to fast, because sometimes they would get pneumonia if they cool down too fast. 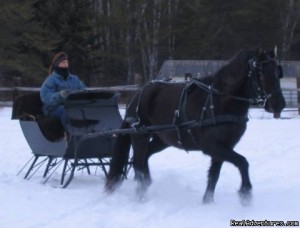 The sleigh was off!

They arrived on time; the doctor saved the baby and her mother. It worked out ok.
Adelard Thebeau had to take the doctor back home, but they didn’t have to hurry back. I am not sure how late they got back home, I’m sure it was quite a night, but everything turned out ok, The little girl was named Regina.
My Dad wasn’t too pleased to see how the horse was sweating so much, but it was an emergency, he had to make the horse run a lot because of the situation, sometimes we have to do things we don’t like to, but we have to do what is necessary. If he would have arrived a half hour later, the doctor might not have been able to save Alma and the baby. Now it’s 2008 and that baby is 66 years old, nice ending.