We wake up well before dawn, in the morning twilight. Packing up the camp takes time, and we have to be on water before sunrise. In the darkness, on the beach, behind the logs, there is a big rock… which was not there yesterday… and which is no rock at all! 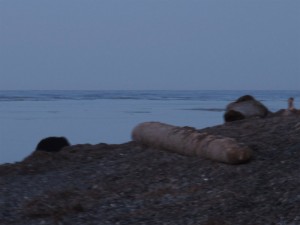 Head down, as if not seeing us – yet deliberately approaching with every step. Pretending, of course – we talk aloud, and he can’t help hearing us. That’s unusually bold! Normally, bears are more scared of us than we of them. Finding the beach already occupied, he was supposed to detour around us through the bush, and wide! But looks like this big male is more accustomed to others moving aside than the other way around… 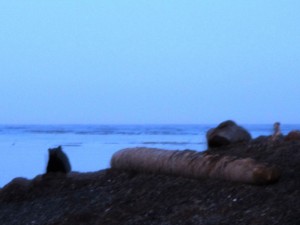 That’s the problem! We cannot let him through: all our equipment, all food bags are laid out in piles, ready to be moved to kayak – in the most vulnerable state for the furry inspector! So, we climb on the logs and spread out the coats – we are high! We are big! We are SCARY! The bear stops and looks up in astonishment – he is surely not used to such treatment… but caution kicks in, and The Master of The Beach slowly, dignifully, returns to where he came from… Nice! 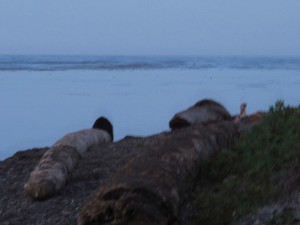 …Not for long… Not even fifteen minutes passed, before the insistent visitor is back. Well, we already know the routine: up on the log, spread the coats, talk loud… have the paddles and bear spray handy just in case… No case: the guest – or, rather, The Master – puffed indignantly, but retreated again. 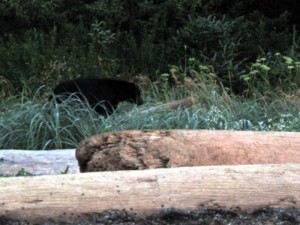 Not sure if the bear would have tolerated being ushered off the beach yet again… Luckily, by the time he was back for the third time, we moved all our bags to kayak at the water line – so, standing with them, we could now let the animal pass. How proud he was, walking right through where our tent had just stood! 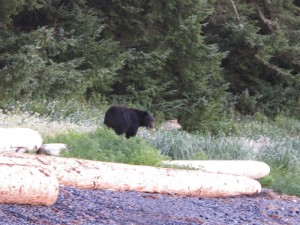 …And finally, from safe distance (for himself), showed us his teeth – know who is the boss here! 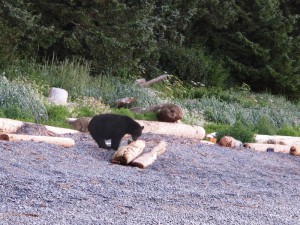 And continued his morning promenade along the beach he just cleared of the unwanted intruders: