I developed a humane trap, that trap is called the Vital Trap. I had to work with the Humane Society.  They helped me with the project as it was designed for their specification.

We had to find out how much power we needed to kill the animal to be humane as possible. We tested it at the Ontario research foundation. They wanted to have a meeting with me. When I walked in to the conference room there were four or five guys sitting at the table and they introduced themselves to me.

These people had a doctor degree in metallurgist, and there I was with a grade four education. I introduced myself as well, I told them I am Vital Thebeau and I said to them you’d have to come down a notch or two so when you talk to me I can understand your language. There are a lot of words that I won’t be able to understand and they said ok.

They said we would like to know how you make that spring and how long does it take you to make it. I said about 15 minutes. We have three guys and it took them three days to make one spring. I had sent them three different springs. They had to have a certain amount of power to kill the animal and he asked me how I tested them.

I didn’t have any technology except my practical way of doing things. So I told them by pulling on the spring. If it is hard to pull it means that it would hit harder and that’s how I do it. He told me that all of the three springs all passed and was more than what we need for power.

They asked Mr. Gordon, he was a lawyer for the company; Mr. Gordon talked to me one day and wondered if I would go see him in Ottawa. He got me an appointment with him and I got on the airplane at Fredericton Airport and I landed at Ottawa airport, got a taxi and went to the hotel for the night.  The next morning I took a taxi, got to the building, I found the elevator went up to the18th floor. I didn’t know what kind of a fellow he would be. I was dressed up like a business man.  I didn’t know what to expect and I was nervous about this meeting. I walked into the office the receptionist asked me who I was looking for. I said, I am looking for Mr. Gordon.

He was very surprised to see me dressed up with a nice grey suit and mink bow tie. He was so excited. I had to meet his bosses; he introduced me to a lot of people. He was telling them that I was a trapper from New Brunswick and that I had invented the Vital Trap. He was such a nice man. They done all the work to get that trap patented. It took about two years to get all the work done; we got the patent number in 1982. I went to see him three times after that he was always glad to see me. We had to sign a contract with the Canadian patent and development. 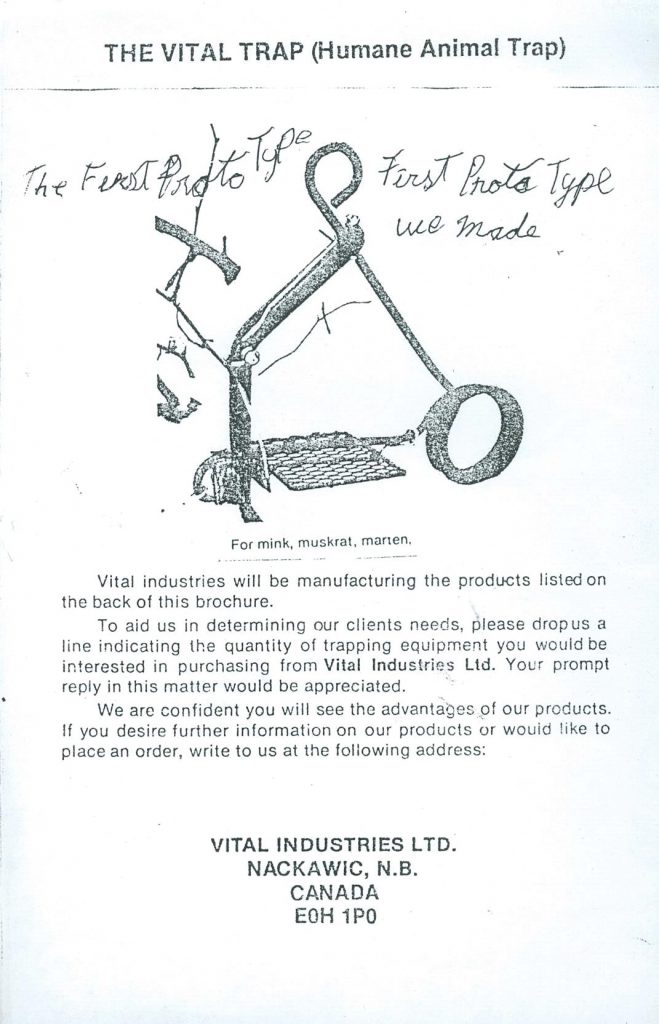