Coal Miners and Bulldozers, Welders and Me.

A Message For You
by Vital Thebeau

CHAPTER 19
1948
My sister Dora and her husband Alfonse moved to Minto to work in the coal mine. My brother-in-law was working underground, sometimes it was around 50 feet deep and the coal was 30 inches thick in the mine where he worked for a year or so. Shortly after my brother Leonard went to visit them. While he was there he went to see the open coal mine. They had a work shop to repair their equipment; they had a lot of welding to do. He went to the shop, talked to the foreman and asked about a job. They had one job opening, so they hired him that day. He started to work a few days later in the shop as a welder.  He worked there for a few months, and then he let us know where he was working. He thought maybe it would be good for me to get a job there at the mine. It was good for him to let us know that there was lots of work in Minto. My brother Raymond went to work at the mine, my brother Eddy, and my older brother Alban, they all moved to Minto in the fall. I also went to Minto to work after he was telling me about jobs being there.
I started to work as a labourer for 60 cents an hour that was better than what we were getting for a cord of pulp at that time. It wasn’t a whole better, but the job was easier than cutting pulp. I started with Stan Kennedy, I was French, he was English, and he was unable to speak French. I worked for about 2 or 3 months, by that time I started to learn a little English, after that I started to work in the shop.
They wanted me to learn how to weld. I worked on bucket teeth that were on a dragline bucket, 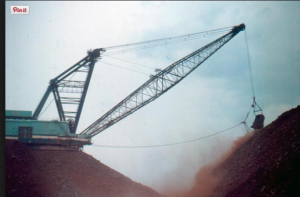 they would wear off a lot because they were removing the ground from the top of the coal. I learned to weld in about four months.
My foreman Steve, come to me one day and asked me if I could operate a bulldozer. At that time, I had never seen a bulldozer before I came to Minto.  Steve said to me, you could try it, you may like it. Steve and I went over to my brother Eddy, he was operating it and he showed me how to operate the bulldozer for about an hour. Steve and Eddy left to go back to the shop leaving me alone for the afternoon so I could get use to operating the machine. The next morning, I went to the shop, Steve asked me what I was doing there; I said I don’t know how to start the bulldozer. Steve told my brother Eddy to go with me to help start the bulldozer. It had a small 2 cylinder motor to start the big motor. It was very hard to start because we had to crank it half a turn at a time. We worked for over half an hour cranking that little sucker and still didn’t get it started.  Eddy said he would go to the shop to get some cables so we could tow it with the other dozer. While he was gone I gave that sucker a crank and the thing started, but I didn’t know how to put it in gear so I could get the big one going, finally I got it figured out. By the time my brother got back, I was letting it warm up, after that I had no problem. After a few days I never had problem. 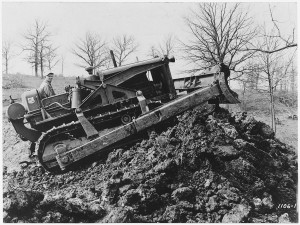 I had been working 12 hours a day, seven days a week.  One weekend my mom and dad came to visit, so that gave me a little bit of time to visit my parents. On Monday morning the big boss comes to see me, he wanted to know where I was Saturday and Sunday. I told him that my mom and dad had come up to visit and I wanted to spend the weekend with them. He said to me, I can give you all summer off. I said that is ok with me, I went to the office and my check was already made. A few weeks after, the big boss sent word that he wanted to see me. I went back to see him and he asked me to come back to work. I said I would, if he gave me 10 cents an hour more than I was getting before, and the bugger gave it to me.
The reason he hired me back was because I was the only one that could start the little motor. I continued to work for him until October of the next year. At that time all of the workers decided that they should have a union. When the owner found out, they shut the whole thing down and they laid everybody off.
So there we were, with no job. I started to look for another job for a couple of weeks. I went back to Minto. I had a motorcycle and I went to the beach in Grand Lake. I had fun.