Salme Stories – A Mother’s Journey Part 2
There is such unrest in the air today.
Isis. Plummeting oil prices. Crashing economies. Job losses.
The ever-present causes and effects of homelessness and hardship.
Some say life is a choice.
Life says it is pure chance.
Truth is none of us really know.
We can only guess, learn from the past and try not to repeat the worst of it.
Humanity, however, appears to be a slow learner.

As I read further into my Mother’s journal she talks a little about the ‘Dirty Thirties’.
A time when markets crashed, poverty prevailed, and people were desperately seeking life out of anything they could to survive.
They were hardy and brave back then.
I wonder how soft we have become.
I wonder…..

That was a very hard time there for a lot of men down in Toronto and Montreal, in the cities, there were no jobs at all, and that’s why they called it the dirty thirties. It was very difficult. And since 1928, the same year I was born, the train also arrived and went through to Timmins, (Ontario) and there would be what people called “Hobos” jumping off freight trains. Well my Dad said to me, “They’re not all Hobos and they’re not all bad. Some of them are men with no money to feed their families.” They had no money. Some of them would have a dollar or two and a little package with them with clothes, and this kind of thing, and they had jumped freight in desperation. They’d heard of bush work and mine work up there in the north.

Well, Leo and I decided to be good Samaritans and we’d go down there and we’d watch whenever a train went by or a freight train and then we’d catch the men and say “Come with us! We know where you can go and have something to eat.” And most of them followed us, and we took them to the Finnlandi Café, and I never did find out if Mom & Dad appreciated this or not, because of course they didn’t always get money right away from these customers. But Dad did tell me years later that there were only a very few who didn’t come back and pay. ‘Cause most of them came and paid and in some cases, Dad said it was his right to say no, or that it’s alright, or whatever, but he said even if they couldn’t pay, most of them would come and cut some wood or chop some wood out in the back yard, or go in the bush and bring wood. They would try, and in later years, when they would maybe have a farm somewhere, they would come with bags of potatoes and turnips and carrots and onions, you know. He said there was only a very few, but he said what may have happened to them is that maybe they didn’t get a job, and would have had to move away, or gone farther away somewhere. So, they would try to put them up. 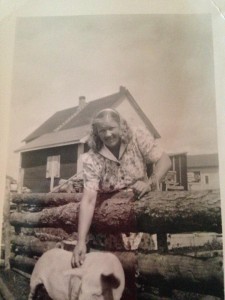 I remember seeing mattresses in the hallway upstairs and in the little lounging room and there would be 3 or 4 men extra at times and most of the ladies around would help out. Different ladies, they wouldn’t all be just Finn, there would be Ukrainians, and Polish, … there were all kinds of nationalities there, and they would come and donate their time and stuff, and got very little pay for it. Of course they could eat there. And I remember sometimes sitting at the table and there would be 2 or 3 little children there that were my age or younger, and they would feed them there too while they worked. So in a way it helped them, it helped Mom and Dad, and, very shortly after, he realized it was bigger than he thought, and he went back to work underground in the mine. And that’s how they were able to get along.”

I appreciate the tough times in life.

They let you see what you’re made of!

Actually, I  strongly believe that we need them.

We need loss and grief in order to appreciate, and respect, gain and abundance.

I believe that as soon as we start getting “too big for our britches”, as my Mom would say, we, as a society, need a good dose of reality.

That we are ALL just as important as, and in need of, one another.

I, personally, have lived in both poverty and wealth.

I would SO much rather live in a cottage full of love than a mansion that echoes.

Growing up in my family home, some of the happiest times, and best friends, were made when, in our own poverty, we would reach out to feed another family in need.

“Come on in! We’ll just add a bit more water and spuds to the soup,” Mom would cheer!

She would bring out the good tablecloth and matching dishes.

Every spoonful of garden fresh, vegetable soup warmed our bellies,

The conversations around the table…

And drought to the sweet, sweet smell of rain.

With love and friendship,

in good times and in hard times,

ps.: This is one of my favorite tracks on my debut album “Looking at Love”. It speaks about how one person can make a huge difference in the life of another, by adding the soothing Rain of friendship, a kind ear, a soft hug, a bowl of soup and honest love. Enjoy!

It is my special gift to You from Us: CLICK HERE