I had attained the age of fifteen years and was about to enter into and realize a man s life, as we Indians understood it, when the change came. One fine September morning as I returned from the daily hunt, there seemed to be an unusual stir and excitement as I approached our camp. My faithful grandmother was on the watch and met me to break the news. “Your father has come – he whom we thought dead at the hands of the white men,” she said. It was a day of miracle in the deep Cana dian wilderness, before the Canadian Pacific had been even dreamed of, while the Indian and the buffalo still held sway over the vast plains of Manitoba east of the Rocky Moun tains. It was, perhaps, because he was my honored father that I lent my bewildered ear to his eloquent exposition of the so ‘called’ civilized life, or the way of the white man.
I could not doubt my own father, so mysteriously come back to us, as it were, from the spirit land ; yet there was a voice within saying to me, “A false life! a treacherous life!” 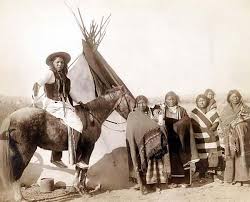 In accordance with my training, I asked few questions, although many arose in my mind. I simply tried silently to fit the new ideas like so many blocks into the pattern of my philosophy, while according to my untutored logic some did not seem to have straight sides or square corners to fit in with the cardinal principles of eternal justice.
My father had been converted by Protestant missionaries, and he gave me a totally new vision of the white man, as a religious man and a kindly one. But when he related how he had set apart every seventh day for religious duties and the worship of God, laying aside every other occupation on that day, I could not forbear exclaiming, “Father! and does he then forget God during the six days and do as he pleases?”
“Our own life, I will admit, is the best in a world of our own, such as we have enjoyed for ages,” said my father. “But here is a race which has learned to weigh and measure everything, time and labor and the results of labor, and has learned to accumulate and preserve both wealth and the records of experience for future generations. You your selves know and use some of the wonderful inventions of the white man, such as guns and gunpowder, knives and hatchets, garments of every description, and there are thousands of other things both beautiful and useful. “Above all, they have their Great Teacher, whom they call Jesus, and he taught them to pass on their wisdom and knowledge to all other races. It is true that they have subdued and taught many peoples, and our own must eventually bow to this law; the  sooner we accept their mode of life and follow their teaching, the better it will be for us all. I have thought much on this matter and such is my conclusion.”
There was a mingling of admiration and indignation in my mind as I listened. My father s two brothers were still far from being convinced ; but filial duty and affection over- weighed all my prejudices. I was bound to go back with him as he desired me to do, and my grandmother and her only daughter accompanied us on the perilous journey. The line between Canada and the United States was closely watched at this time by hostile Indians, therefore my father thought it best to make a dash for Devil s Lake, in North Dakota, where he could get assistance if necessary.
He knew Major Forbes, who was in command of the military post and the agency. Our guide we knew to be an unscrupulous man, who could easily betray us for a kettle of whisky or a pony. One of the first things I observed was my fathers reading aloud from a book every morning and evening, followed by a very strange song and a prayer.
Although all he said was in Indian, I did not understand it fully. He apparently talked aloud to the “Great Mystery”, asking for our safe guidance back to his home in the States. The first reading of this book of which I have any recollection was the twenty-third Psalm, and the first hymn he sang in my presence was to the old  tune of Ortonville.
It was his Christian faith and devotion which was perhaps the strongest influence toward my change of heart and complete change of my purpose in life. I think it was at our second encampment that we met a large caravan of Canadian half-breeds accompanied by a band of Northern Ojibways. As was usual with the former, they had plenty of whisky. They were friendly enough with us, at least while sober, but the Indians were not.
Father showed them his papers as a United States citizen and a letter from Major Forbes, telling of his peaceful mission, but we could not trust our ancestral enemies, the Ojibways, especially when excited with strong drink. My father was calm and diplomatic throughout, but thus privately instructed me : “My son, conceal yourself in the woods; and if the worst comes you must flee on your swift pony. Before daylight you can pass the deep woods and cross the Assiniboine River.” He handed me a letter to Major Forbes. I said, “I will try,” and as soon as it was dark, I hid myself, to be in readiness.
Meanwhile, my father called the leading half-breeds together and told them again that he was under the protection of his government, also that the Sioux would hold them responsible if anything happened to us. Just then they discovered that another young brave and I were not to be found, which made them think that father had dispatched us to the nearest military post for help. They immediately led away their drunken comrades and made a big talk to their O jibiway friends, so that we remained undisturbed until morning.
Some days later, at the south end of Devil s Lake, I left our camp early to shoot some ducks when the morning flight should begin. Suddenly, when out of sight of the others, my eye caught a slight movement in the rank grass. Instinctively I dropped and flattened myself upon the ground, but soon a quick glance behind me showed plainly the head of a brave hidden behind a bush. I waited, trying to figure out some plan of escape, yet facing the probability that I was already surrounded, until I caught sight of another head almost in front and still another to my left.

In the moments that elapsed after I fully realized my situation, I thought of almost everything that had happened to me up to that day; of a remarkable escape from the Ojibways, of the wild pets I had had, and of my playmates in the Canadian camps whom I should never see again. I also thought with more curiosity than fear of the ” Great Mystery” that I was so soon to enter. As these thoughts were passing through my mind, I carelessly moved and showed myself plainly to the enemy. Suddenly, from behind the nearest bush, came the sound of my own Sioux tongue and the words, “Are you a Sioux ? ”
Possibly my countenance may not have changed much, but certainly I grew weak with surprise and relief. As soon as I answered “Yes!” I was surrounded by a group of warriors of my tribe, who chuckled at the joke that had come so near to costing me my life, for one of them explained that he had been on the point of firing when I exposed myself so plainly that he saw I was not an Ojibiway in war paint but probably a Sioux like himself.
More Tomorrow