Putting your work out into the world is the most difficult part of creating something. Not only are you unsure of yourself, you’re unsure of your audience, as where your focus should be. An entire industry is built around writers paying for submissions to “contests”, or even just to get their work read. Here’s an opportunity that won’t take advantage of you.
If you’re an emerging writer, especially a screen or stage writer like myself, you know getting your work read is only half the battle. You’re also trying to get your work produced, to get it on its feet and seen and (god willing) turning a profit, however small. Then there’s the trick of finding awards for which you are actually eligible, often complicated by being Canadian.
Sometimes being in the commonwealth pays off however, such as this tasty missive that came through my email today. The Kenneth Branagh Award for New Drama Writing not only awards a modest but respectable cash prize, but will also underwrite  three new plays from amateur talent in the 2016 Windsor Fringe.
PROS 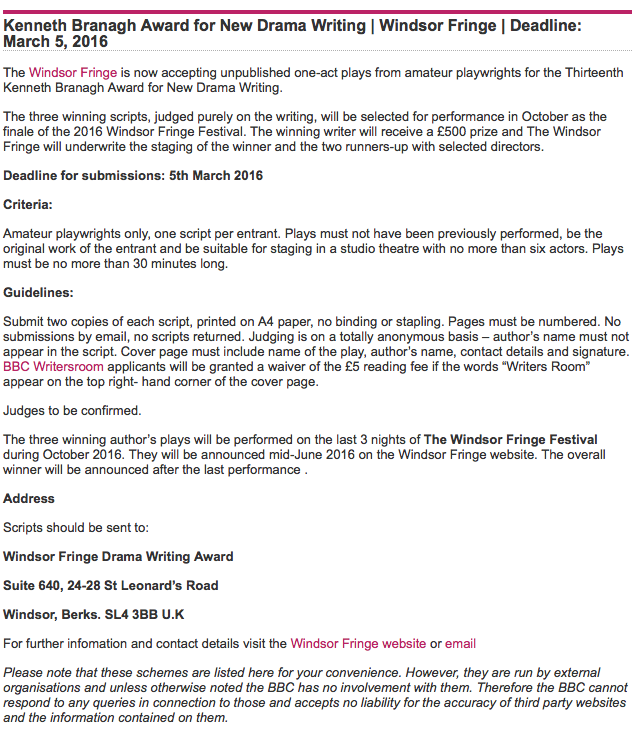 That’s the whole deal. All that remains now is for you to get out there and get cracking. Good luck!

Tonight (Thursday, October 27th) EVENT magazine will be hosting an evening of prose and poetry, showcasing the work of four indigenous writers.

In a Time of Chaos and Confusion, Martha Allott comes thru!

I have never been a Bible guy, there was always a Bible in the house, somewhere. I knew the big things, as chosen by modern media, Hollywood epics on Easter weekends. 10...