It’s never been easier for people to generate video, of whatever they want and in staggering levels of detail and variety. One hundred hours of video are added to YouTube alone – every single minute. You could watch day and night, for a hundred lifetimes, and still see but a fraction. The bad news is it’s mostly terrible, and a good chunk of the terrible is being marketed pretty heavily at you.
Found Footage trawls through the internet’s endless sprawl to collect the best short films, sketches, home movies, ads, training videos, newscasts, cell phone footage, and other obscurities. We’re looking for the brightest gems and the strangest mundanities. We seek out the videos that fell through the cracks,  and missed out on the attention they so richly deserved.

Danielle Smith led Alberta’s Wild Rose Alliance until this past December, when she and several colleagues crossed the floor to join the PC party. Here’s a video of her tearing a strip off the PC party, before she changed her mind.

The publishing account – named “Danielle Smith” – only has three variations on this video, and seems to take a very low-key attitude towards tearing her apart. We assume the real Danielle Smith wouldn’t work so hard to make sure this mildly embarrassing moment was publicized. It must be a super fan, working with the twin benefits of free time and obsession. 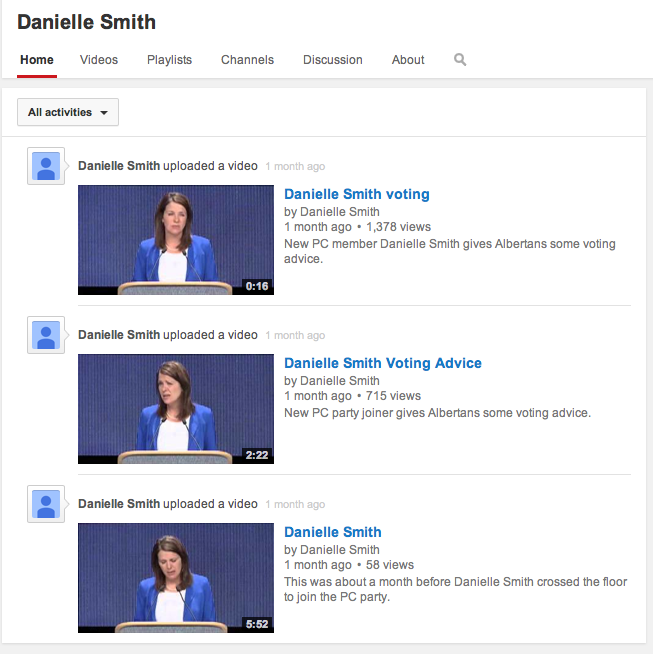 Variations on a theme.

Looks like three copies of the same video, possibly with different metatarsi. We picked the median option for this extra attention – the first one is blowing it out of the water with close to 1400 views, and the last video is dead in the water with 58.
There are a lonely two comments on this one, as mild as the video itself. If this clip was posted as a protest, it can say it accomplished this much.

The people are riled.

Have an amazing video we’ve missed, or a project you’d like to shed a little limelight on? Let us know. We’re happy to oblige.