Found Footage trawls through the internet’s endless sprawl to collect the best short films, sketches, home movies, ads, training videos, newscasts, cell phone footage, and other obscurities. We’re looking for the brightest gems and the strangest mundanity. We seek out the videos that fell through the cracks,  and missed out on the attention they so richly deserved.

An interminable opening crawl of newspapers being packaged is the shaky introduction to this narrative. A series of spinning newspapers are spliced with Johnny’s “reaction” shots as he/it is granted citizenship, becomes a home-owner, and gets a car. All symbols of being a well and truly established American. We will return to these newspapers at every act break. It’s infuriating.
I haven’t seen Short Circuit since I was a kid, and I’m struggling to recall if his AI was always this transparent. He usually expresses base thoughts and emotions through popular catchphrases and soundbites, with the occasional wiggling of his ‘eyebrows’, or a grasping of his metallic pincers. Johnny Five rides shotgun with a journalist as she tracks the stolen cars, but there’s no way he’s of any use to her. He rolls at a snails pace, and provides the same services as a thesaurus.
Or maybe he’s just a childlike robot, young only by experience. Johnny-Five seems eager to be more human, always attempting to make friends, but basic concepts are still alien to him. He doesn’t understand birth, or figures of speech. He doesn’t need to wear clothes but insists on doing so, not realizing the colossal blunder he makes just by wearing a hat indoors. And of course he is completely unprepared for human beings to steal from him.
This is supposed to be an educational film, but it’s really a short tragedy about a robot failing to find a place in human society. 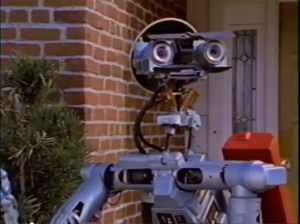 That being said, there’s some wisdom that never goes out of style here:

This is only part 1, but the novelty value wore off rapidly over these 15 minutes. I can only hear so many jokes about robots eating (oil and electricity gags) at one time, and did not have the patience to finish this out. I prefer to end on a high note, and switched to the best part of the J5 series: “Who’s Johnny?” by El DeBarge.

It’s never been easier for people to generate video, of whatever they want and in staggering levels of detail and variety. One hundred hours of video are added to YouTube alone – every single minute. You could watch day and night, for a hundred lifetimes, and still see but a fraction. The bad news is it’s mostly terrible, and a good chunk of the terrible is being marketed pretty heavily at you.
Have an amazing video or project you’d like a little limelight on? Let us know. We’re happy to oblige.