Found Footage trawls through the endless sprawl of the internet, collecting the best short films, sketches, home movies, ads, training videos, newscasts, cell phone footage, and other obscure media. We’re looking for the brightest gems and the strangest mundanities. We seek out the videos that fell through the cracks,  and are missing out on the attention they so richly deserve.

Jerry Seinfeld (whom you all know and love) and Joel Hodgson (the genius behind MST3K) team up to introduce this HBO comedy special, mixing Jerry’s affable banter with Joel’s sleepy-eyed, prop-centric humour. Larry Mill and Carol Leifer also pop in for some sketch appearances, oddly enough. Make no mistake, this special is all about Jerry, but Joel’s influence is clear in every goofy prop or exploding cereal box.

Two years later, Seinfeld would hit the airwaves. This is a show sold partly on the concept of showing the off-stage life of a comedian, revealing the inspiration behind their material. This whole short then works not only like the lead to a TV special but an introduction to Seinfeld himself as a brand. This feels like an audience litmus test bridging his transition to a full time sitcom. The short plays a little like Seinfeld’s book (Seinlanguage), which plays exactly like his act: heavy focus on his family and childhood experiences, multiple references to cereals, and minor arguments in the world of dating.
This short was filmed during the comedy boom of the 80’s, and it’s a little strange now in 2015 to see Jerry introduce the “secrets of stand-up comedy” as closely guarded secrets. Comedy is more respected than ever, and easy access to the means of content creation provides an endless well of interviews, master-classes, and recorded lives sets to both fans and students of comedy. Show’s like Louie or Curb Your Enthusiasm delve even deeper, beyond the simple inspiration behind bits and into the mindset/POV of a comedian in their personal lives.
Here, Jerry creates a series of personal narrative sketch pieces, each with a distinct style and perspective. In this way, Stand Up Confidential works like an early version of a personal-perspective concept comedy, though not nearly as effectively. To modern sensibilities, this video comes across as almost insulting in how hard it works to explain “comedy” to its viewers. They even refer to the audience as “the general public”. The concept is inviting you to put on a pair of “x-ray comedy specs”, to see the world the way a comedian does (and you never could, you dullard). That little idea leads to this shot, inside the mind of comedic genius: 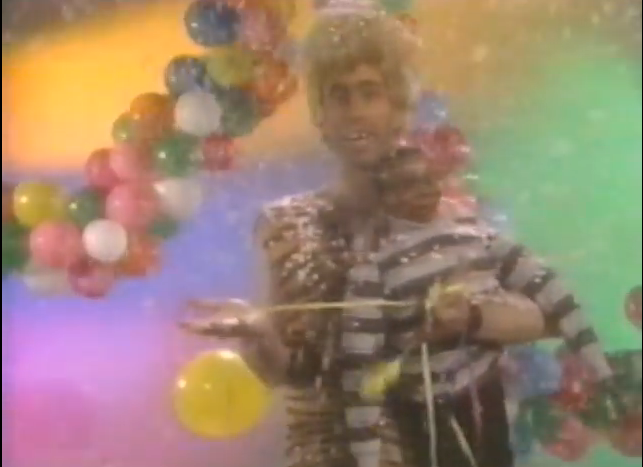 It’s a neatly useful device that allows Seinfeld to jump between styles of sketch comedy (again, feels like this is a portfolio reel for Jerry), but is completely bogged down in unnecessary explanations of just what exactly is happening in this crazy, zany video. You know, us rubes get lost midway through.
Comedy rarely ages well, and for the most part doesn’t hold up. The comedy, unfortunately, is largely set-inspired and relies on cartoonish prop-pieces as well as cartoonish characters. There is none of Larry David’s bite and misanthropy here. Everything about this video screams “safe bet”, unless you count Jerry hamming it up in a variety of dog-suits (he’s playing a dog, you see). The edgiest sequence is when Jerry spends a minute or two abusing a cat, bouncing it like a basketball, while he waits for his date to finish up in the bathroom (not a fresh idea in 1987 either). The cat checks a watch to find it’s 9 lives ticking away, possibly the short’s best gag. 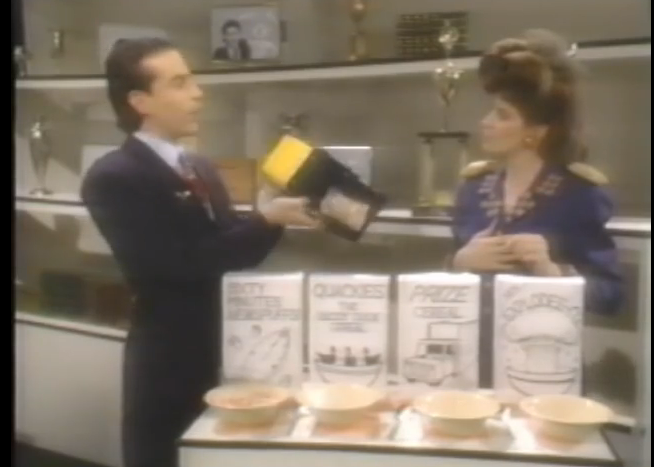 These cereal boxes are the worst designed props in the short.

This all being said, the surrealism of Jerry’s POVs is pretty interesting. Extremely colourful, and in some cases surprisingly scary. In particular I enjoyed a child-abusing robotic father from his “dad-lessons” sketch, and a dreamy sequence where his childhood self receives the key to the cereal aisle. Jerry is as affable and charming as always, though just like on Seinfeld he isn’t great at playing anyone but Jerry Seinfeld. Two years later, he’ll never have to play anyone else ever again. 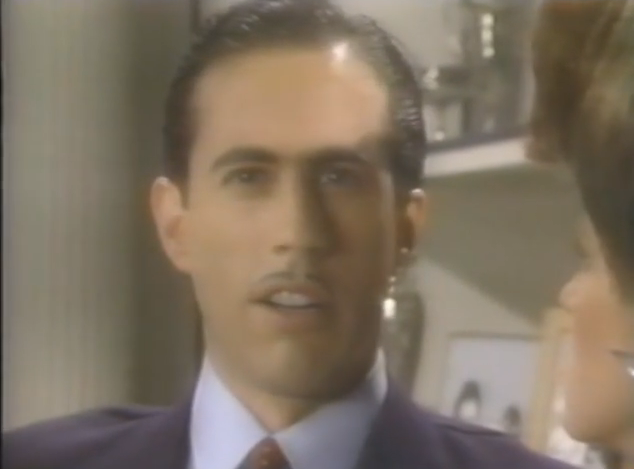 Thank god Seinfeld was a hit, or this short would be making the rounds as an embarrassing example of a near-success, instead of just an early piece of work removed from time. Whatever the content, I’m always fascinated to see a legend at the early stages of their career. Besides, we all know how amazing his life is going to get after this point. Best of all, there’s some inspiration in seeing how far entertainment has come in presenting comedians to the world.
Have an amazing video we’ve missed, or a project you’d like to shed a little limelight on? Let us know. We’re always happy to oblige.