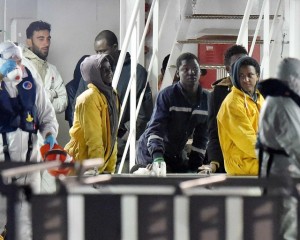 Tunisian skipper Mohammed Ali Malek (second from L) stands on the deck of the Italian Coast Guard ship Gregretti, which rescued 27 survivors from a migrant shipwreck in the Mediterranean, on April 20, 2015. (TULLIO M. PUGLIA/Getty Images)

The European Union is once again struggling to come up with a coherent asylum strategy for its 28 members. In recent years, the rising number of asylum seekers entering the European Union through countries such as Italy and Greece has generated friction among member states, fueled criticism of the Schengen Agreement and contributed to the growing popularity of nationalist parties.
However, the European Union will not reform its asylum policies in any significant way. Member states will provide more financial assistance to Mediterranean countries, but they will refuse to accept quotas of immigrants over the coming months and years. Anti-immigration sentiments will persist across the Continent, putting substantial pressure on one of the European Union’s founding principles: the free movement of people.
Analysis
On April 23, the European Union submitted to pressure from Italy and Malta and held an emergency summit to address the immigration crisis in the Mediterranean. Between January and April, more than 1,750 migrants died in shipwrecks at sea, a death toll 30 times higher than that of the same period in 2014. Over the past year and a half, Italian ships have rescued more than 200,000 people in the Mediterranean Sea.
After the summit concluded, EU leaders decided to triple the financial resources for the bloc’s operations in the Mediterranean Sea and to boost cooperation with certain countries like Tunisia, Egypt, Sudan, Mali and Niger to better control borders and combat human trafficking. They also asked EU Foreign Affairs Chief Federica Mogherini to begin preparing for a possible military operation aimed at identifying, capturing and destroying vessels before traffickers could use them. However, the bloc’s leaders did not reach any agreements on the distribution of asylum seekers across the Continent. Moreover, many of the goals discussed during the summit will prove difficult to achieve.
Asylum Crisis Dovetails with Europe’s Political Rifts
Europe’s refugee crisis intersects with many of the European Union’s structural problems. First, member states lack a cohesive view on the issue of asylum. According to existing European norms, asylum seekers are the responsibility of the country of first entry. In absolute terms, Germany receives the most asylum seekers, though Sweden receives the most relative to its own population size.
However, the crises in Libya, Iraq and Syria as well as the constant violence in sub-Saharan Africa have led to rising waves of people entering the European Union by sea. Human smugglers are taking advantage of the political turmoil in Libya to use the country as a launchpad for ocean crossings. The civil war that followed former Libyan leader Moammar Gadhafi’s ouster in 2011 left the country without a functioning government, navy or coast guard, placing a heavy financial burden on the shoulders of Mediterranean countries to provide shelter and conduct rescue operations at sea.
Italy has spearheaded criticism against the bloc’s response to the asylum issue. In October 2013, after a shipwreck near the island of Lampedusa left hundreds dead, Rome launched Mare Nostrum, a maritime mission to rescue immigrants on the Mediterranean Sea. High operational costs prompted Italy to ask for assistance from the European Union, which then launched the Triton rescue operation in November 2014. (Triton was a smaller mission that stayed within 30 miles of the Italian and Maltese coastlines, compared to Mare Nostrum ships, which patrolled near the Libyan coast.)
Rome has repeatedly asked the European Union for greater solidarity in the form of rescue mission funding and a more balanced distribution of immigrants across member states. Both issues are extremely controversial, since some governments such as that of the United Kingdom believe a larger rescue operation would attract asylum seekers, while other governments in Northern Europe dislike the idea of introducing immigrant quotas in the European Union.
The immigration crisis is heightening tension among EU members. Politicians in Austria and Germany have criticized the Italian government for failing to register all of the asylum seekers that arrive in the country. If immigrants are not registered at their point of entry, they can move elsewhere within the European Union and apply for asylum there. Meanwhile, French and British authorities blame each other for the immigrants crossing the English Channel from the port at Calais. The immigration crisis even took a strong political turn when the Greek defense minister threatened to unleash “a wave of millions of economic migrants,” including jihadists, on Europe unless the eurozone reduces its demands for austerity measures. 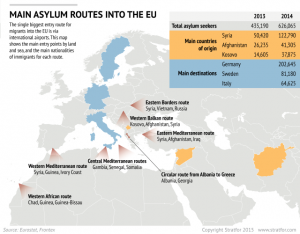 All of these frictions are linked to the Schengen Agreement, which eliminates border controls within Europe. Once a person has entered the Schengen area, he or she can move across the Continent without encountering significant barriers. This agreement is the source of Northern European countries’ concerns about the lack of efficient border controls in the European Union’s periphery. Nationalist parties often criticize the Schengen Agreement to promote tougher legislation on immigration and, in some cases, the end of the European Union’s principle of the free movement of people.
Political Effects Ripple Across Europe
The political effects of the immigration crisis have been felt across Europe. The popularity of nationalist parties is rising, and EU members still cannot reach a consensus on immigration policies. Support for Italy’s Northern League, which criticizes Rome’s policies and demands that Italy stop receiving asylum seekers, has grown steadily in opinion polls over the past six months. Sweden’s anti-immigration Sweden Democrats likewise saw record-high levels of support in late 2014, after towns with large immigrant populations rioted.
The rise of nationalist parties is also affecting the behavior of moderate politicians. Countries such as the United Kingdom and France have resisted proposals to redistribute immigrants across the European Union out of fear that such action could strengthen their own nationalist parties, including UKIP and the National Front. Meanwhile, the Netherlands’ ruling coalition nearly collapsed because of a political dispute over the country’s asylum policy.
Recent terrorist attacks in countries such as France and Belgium, as well as threats from Islamist groups in places such as the Vatican, have also reignited fears of a potential connection between refugees and terrorism. Security forces in Europe are worried that terrorists disguised as asylum seekers could enter the European Union, a concern that has also motivated the reactions of local populations. Germany became an example of this trend with the rise of the Pegida protest group, which rejects Muslim immigrants, and arson attacks against refugee hostels.
Europe’s Options Are Limited
There are a number of reasons that will keep the European Union from implementing many of the proposals discussed April 23, especially the one regarding the use of force against smuggling rings in northern Africa. First, the mission’s scope and goals will be difficult to define, and its success remains dubious. Second, several EU members will oppose the use of force in Libya at a time when the bloc is pushing for a diplomatic solution to the country’s civil war. Finally, there will likely be disagreement over who should staff the mission and whether the United Nations should approve it.
European leaders will also probably fail to agree on redistribution of asylum seekers. During the emergency summit, British Prime Minister David Cameron offered to send a British warship to the Mediterranean to help rescue immigrants, a move that signified a shift from London’s previous position on the issue. However, Cameron stressed that any asylum seekers rescued by British ships would not qualify for asylum in the United Kingdom and instead would be sent to Italy. Because the United Kingdom will hold general elections in mid-May, Cameron will refuse to take any bold steps that could hurt his electoral prospects.
The Danish government is making similar calculations. Hours before the EU summit, Danish Prime Minister Helle Thorning-Schmidt said her country would not contribute to the redistribution of immigrants. Thorning-Schmidt also said Denmark would support the EU-sponsored operations, but that Copenhagen would not send ships to the Mediterranean Sea. Denmark’s elections are set for September, and the anti-immigration Danish People’s Party is currently polling around 19 percent — considerably higher than the 12.3 percent it received in the 2011 general elections. Taking a somewhat softer tone, Latvian Interior Minister Rihards Kozlovskis said taking in refugees should be a voluntary decision for EU members.
Given these political considerations, the European Union will likely keep throwing money at the problem, and a comprehensive redesign of the bloc’s asylum policy seems unlikely. Rescue operations will probably be enhanced, but EU members will not reform their asylum policies in any significant way. More important, the bloc will probably refrain from pursuing military action in Libya, where the political crisis is far from over. In the meantime, asylum seekers will continue to enter the European Union, inflaming tensions between member states, strengthening nationalist parties and eroding popular support for the founding principles of the European Union.
“Immigration Drives a Deeper Wedge Between EU States is republished with permission of Stratfor.”