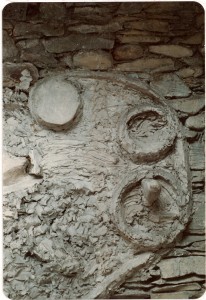 An upward curve of smooth plaster divides the rough plaster field into two sections and allows a change of texture and tone to take place as the work is extended along the wall to the right.The area that is actually plastered reduces in size along the right side of the wall, the colour shifting from the formerly predominate white to a darker grey tone.A series of oval and circular forms are raised from the rough plaster surface and apper to be contained within the composition by a raised line of rough finished plaster which defines the outer edge of the worked surface.The uppermost circular form presents a raised disc to the viewer while the neighbouring circles have perimeters defined by raised lines of plaster, leaving the center sections depressed.
The lowest circle sports a large plaster phallic projection.
The final form is of an oval shape, cut by a vertical curve, which presents a raised, smooth plaster surface.
The three circles are in contact with and form part of the outside curve which defines the outer edge.
Beyond this edge the stone walling continues untouched, as it does above the upper raised ridge of the work.In texture the stone wall is similar in texture to the rough plaster work.The horizontal emphasis of the stone wall can be seen to be the prime difference a.s the plaster work is, for the most part, lacking in vertical or horizontal emphasis.