Appearing as support for the lower left portion of the ridge are two overlapping piers which rise from the floor at an angle of approximately 105 degrees .These project at right angles from the face of the work. These piers display the same rough plaster treatment as the ridge above.
The 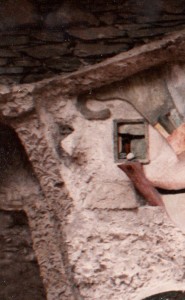 work which extends beneath the top ridge varies in texture and colour as well as undulating towards and receding from the viewer as it spreads across the face of the wall.
There are a number of sharp indentations in this plaster skin which, for the most part, retain their natural colouring. A frame has been sunk into the surface of the work to the right of the piers and this frame has been painted a dark green.The box frame is of metal and the materials inside are typical of the type of debris Schwitters incorporated into the work.
Two large stones fill the upper third and right half of the rectangle, effectively compressing the numerous small objects (stones, bits of wood both machined and natural in form) into the remaining tight space. One of the stones appears to defy this ordering resisting the pressure and pushing out over the edge of the frame.
The large stones have been rendered the same colour as the frame as has the smooth plastered area which extends above the frame. This area runs in a series of curves up to and along the upper ridge before turning down to touch the corner of the metal frame. A short distance beyond this point the surface is abruptly cut off by a division of the surface into a number of coloured rectangular shapes, varying in height in relation to the background.