Some one asked me. “Why are you so worked up on this pension issue? And you have taken a a direct stand against government on this one?”
I answered: Do you know how it feels for your father’s pension to be stolen 35 years after working for the state and contributing to a national pension fund? My dad was due over Ghc 200 a month but was only given Ghc90c over a few months until I said something was missing seeing as his last 5 best years gave him some comfortable civil servant salary. When we checked, he was due Ghc200. I still believe he was due more” So, I stopped believing any state pension manager and by extension any government that tells me I should trust it to keep my private pension money better. ‪#‎Occupypension‬
I am surprised people are surprised at the revelation by the Ghanaian female gospel musician based in Europe that changes in her skin colouration is due to excessive intake of milk. This is the same as a Politician who says to his flock of ‘idiots'(who actually believe him) that in politics, if you see a sheep, say it is a cow. Enjoy your evening. ha ha ha ha ha ha
“Franklin – There must be something fishy going on and am willing to
support any investigations into the operations of NPRA.
I have attached my provisional statement for June 2010 – June 2011 for your
information. Barely gained 3% on my contributions – bad business if you ask
me. Please proceed”- A private sector worker. 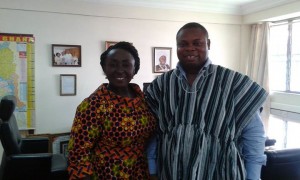 I paid a courtesy call on Mrs. Dzifa Abla Gomashie-Ahiaglo (Maama Dzramedo I) Deputy Minister of Tourism, Culture & Creative Arts to discuss the values every Ghanaian must live by, opportunities in her sector and how we can all affect leadership in a positive way.I knew her quite well before she became a minister and she was quite accomplished too before she was made Minister.
Thank you Maama for the great discussion and invaluable pieces of advice — with Abla Dzifa Gomashie and Kenny Senayah.
Burkina Faso’s Parliament on fire….mess with a people’s constitution and you will run away as is alleged Blaise campoare has done to Togo…..Nothing of this sort should happen here as we contemplate some pretty funny amendments,but it is instructive.
For your information I pray for people as a past time too. The lady captured here got married barely a year and I said the last prayer at their wedding which included ”’there must be a performance”. 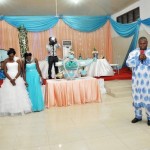 Today I received news that she gave birth to twins. So now you know, I pray for twins only.
I only pray for twins..Evron Hughes we need to start a church!!!
May the souls of all who fell to Ebola rest in peace and hope that the living will be guided to never again allow such calamity to befall us. You, reading this post right now, who think it must be some one else’s responsibility to demand accountability from our leaders , then please think again. All African governments do not value research into science and medicine. They allocate less than 2% of their GDPs into research, and allocate 25% of the continent’s GDP into grand corruption. So, Ebola could have been curtailed after first surfacing in the 1970s, and even recently after Uganda was ravaged by Ebola. But we should not wait for our absentee African governments looking for money from western nations to help right now. Right now, it is dangerous to let the governments in West Africa alone deal with Ebola. As suggested by Amidu Ibrahim-Tanko Individuals and CSOs must not wait for donor funds before they act. I am happy to announce that a CSO that I associate with and yet to be outdoored did what Afia Appiah reports here “some CSOs have made strides in making Ghana Ebola prepared. One group in conjunction with the private medical professionals and the wireless content providers network raised GHC50,000 for Noguchi for test kits when the government paid no mind to the their pleas for test kits. And you know that is the core of our Ebola preparedness. Several groups have also printed out materials for Ebola awareness around Ghana.” Ghanaians let us not wait for our government alone, we should help set up volunteer groups to do more. Thanks Afia Appiah, Sara Asafu-Adjaye and Kathleen Addy for your friendship and thoughtfulness. We will soon be outdoored.
Mr. Jack Kofi Antwi: Mr. Cudjoe, the rented Herald Newspaper is claiming that you have left all the task of helping cleaning up the mess in the government to join forces with Dr. Otabil and Most Reverend Palmer-Buckle Catholic Archbishop of Accra to pray,save the soul of the country and offer peace for all who have stolen and are still stealing public money.
Franklin Cudjoe: Hmm, my brother. These types are beyond redemption. Not even my 5 trips to Pluto and Purgatory to ask for a safe arrival of their sinning souls could be entertained by the angels. That is why I have decided to join forces with the learned men of God , so that together we can heal this land again. Finally the Herald Newspaper is coming around. May the Lord be with the Herald Newspaper. Amen.

The Bonfire Plot – Who Is Guy Fawkes?

Guy Fawkes: Also known as John Johnson,or as Guido Fawkes apprehended on Nov 5th 1605, under the Houses of Parliamnent with hundreds of pounds of gunpowder and a handful of...