In an op-ed for the New York Times, U.S. Senator Maggie Hassan (D-NH) alleges that she is voting against Betsy DeVos for Secretary of Education because:

Each of those claims is belied by concrete facts, and Hassan is guilty of most of the charges she levels at DeVos. Also, Hassan sent her own daughter to a private school, an opportunity that she would deny to other children.

Under the current U.S. education system, the quality of students’ schooling is largely determined by their parents’ income. This is because wealthy parents can afford to send their children to private schools and live in neighborhoods with the best public schools. Such options narrow as income declines, and the children of poor families—who are often racial minorities—typically end up in the nation’s worst schools.

Contrary to popular perception, funding is not the primary cause of differences between schools. Since the early 1970s, school districts with large portions of minority students have spent about the same amount per student as districts with less minorities. This is shown by studies conducted by the left-leaning Urban Institute, the U.S. Department of Education, Ph.D. economist Derek Neal, and the conservative Heritage Foundation.

Moreover, contrary to the notion that certain minorities are intellectually inferior, empirical and anecdotal evidence suggests that with competent schooling, people of all races can excel. For example, in 2009, Public School 172 in Sunset Park, Brooklyn, New York, had:

These and other such results indicate that school quality plays a major role in student performance. Hassan and other critics of school choice are keenly aware of this, as evidenced by the choices they make for their own children. For example, Obama’s first Education Secretary, Arne Duncan, stated that the primary reason he decided to live in Arlington, Virginia, was so his daughter could attend its public schools. In his words:

That was why we chose where we live, it was the determining factor. That was the most important thing to me. My family has given up so much so that I could have the opportunity to serve; I didn’t want to try to save the country’s children and our educational system and jeopardize my own children’s education.

Duncan’s statement is an admission that public schools in the D.C. area often jeopardize the education of children, but he would not let this happen to his child. Few parents have the choice that Duncan made, because most cannot afford to live in places like Arlington, where the annual cash income of the median family is $144,843, the highest of all counties in the United States.

The existing U.S. education system does not provide an equal footing for children, but Hassan criticizes DeVos for supporting school choice, which would lessen this inequity. By its very definition, school choice allows parents to select the schools their children attend, an option that Hassan and other affluent people regularly exercise.

First, private school choice generally increases public school spending per student, which is the primary measure of education funding. As explained by Stephen Cornman, a statistician with the U.S. Department of Education’s National Center for Education Statistics, per-pupil spending is “the gold standard in school finance.”

According to the latest available data, the average spending per student in private K-12 schools during the 2011-12 school year was about $6,762. In the same year, the average spending per student in public schools was $13,398, or about twice as much. These figures exclude state administration spending, unfunded pension liabilities, and post-employment benefits like healthcare—all of which are common in public schools and rare in private ones.

Certain school costs like building maintenance are fixed in the short term, and thus, the savings of educating fewer students occurs in steps. This means that private school choice can temporarily decrease the funding per student in some public schools, but this is brief and slight, because only 8% of public school spending is for operations and maintenance.

Under the current public education system, schools are accountable to government officials, not students and parents. Again, Hassan knows this, because her son has severe disabilities, and Hassan used her influence as a lawyer to get her son’s public elementary school to “accommodate his needs.”

Unlike Hassan, people without a law degree, extra time on their hands, or ample financial resources are at the mercy of politicians and government employees. Short of legal action or changing an election outcome, most children and parents are stuck with their public schools, regardless of whether they are effective or safe. That is precisely the situation that DeVos would like to fix through school choice, but Hassan talks as if DeVos were trying to do the opposite.

Third, taxpayer funds are commonly used for private schools, and Hassan actually wants more of this. Her campaign website states that she “will fight to expand Pell Grants” but fails to reveal that these are often used for private colleges like, for example, Brown University, the Ivy League school that she, her husband, and her daughter attended (disclosure: so did this author).

Hassan’s position on college aid also undercuts her objection that DeVos supports programs that “leave out students whose families cannot afford to pay the part of the tuition that the voucher does not cover.” If that were truly Hassan’s objection, she would also oppose aid that doesn’t cover the full costs of every college, because that would leave out students who can’t pay the rest of the tuition.

Fourth, contrary to Hassan’s rhetoric about accountability to taxpayers, she supports current spending levels on public K-12 schools, “debt-free public college for all,” and expanding “early childhood education” in spite of the facts that:

In sum, Hassan supports pumping taxpayer money into programs with high costs and substandard outcomes, but she opposes doing the same for private K–12 schools that produce better outcomes with far less cost.

Hassan’s claim that private school choice programs “leave behind students with disabilities because the schools do not accommodate their complex needs” is also false.

In Northern and Central New Jersey, there are more than 30 private special education schools that are approved by the state. As far as parents are concerned, these schools serve the needs of their children better than the public schools in their areas. If this were not the case, these private schools would not exist.

More importantly, if parents don’t think that a private school will be best for their special needs child, school choice allows them to keep the child in a public school that is better funded thanks to the money saved by school choice.

In a recent brief to the Nevada Supreme Court, the nation’s largest teachers’ union and its state affiliate argue that free-market voucher programs will lead to “cream-skimming—the drawing away of the most advantaged students to private schools––and lead to a highly stratified system of education.”

As detailed above, the current public school system is highly stratified by income, and income and education go hand in hand. Hence, the real issue is not stratification but what happens to students who stay in public schools. Contrary to the belief that school choice will harm these students, a mass of evidence shows the opposite. 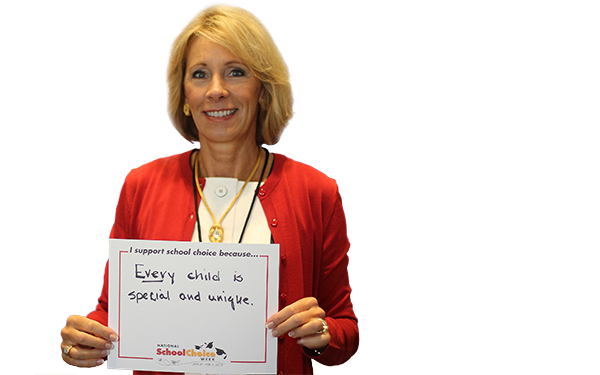 Who Wins and Who Loses?

Wide-ranging facts prove that school choice is a win for students, parents, and taxpayers. However, it financially harms teachers unions by depriving them of dues, because private schools are less likely to have unions than public ones.

In turn, this financially harms Democratic politicians, political action committees, and related organizations, which have received about $200 million in reported donations from the two largest teachers’ unions since 1990. Unions also give many unreported donations to Democratic Party causes.

Teachers’ unions are firmly opposed to private school choice, and the National Education Association has sent an open letter to Democrats stating that “opposition to vouchers is a top priority for NEA.”

So why does Hassan oppose giving other children opportunities that she gave to her own children? Motives are difficult to divine, but the reasons she gave in her op-ed are at odds with verifiable facts and her own actions.

James D. Agresti is the president of Just Facts, a nonprofit institute dedicated to publishing verifiable facts about public policy.

The Bonfire Plot – Who Is Guy Fawkes?

Guy Fawkes: Also known as John Johnson,or as Guido Fawkes apprehended on Nov 5th 1605, under the Houses of Parliamnent with hundreds of pounds of gunpowder and a handful of...