I’m a very thirsty person. When I ask the waiter to bring a pitcher of water for the table, I drink it all by myself. So thirsty that I have enough empty water glasses by the sink at the end of the day that it looks like I haven’t done the dishes in a week.
I had my colon removed a while ago. Your colon among a few other duties chiefly absorbs water. Since I don’t have one, my small intestine tries to pick up the slack, but chronic dehydration will always be an issue for me. Naturally, I started combing the internet for a solution. I came across Drip Drop Oral Rehydration System, which was was originally designed by Dr. Eduardo Dolhun with the Mayo Clinic on a relief mission to Guatemala. It continues to be used in a medical setting to treat dehydration related to sweating, diarrhea and vomiting. As always, it’s best to talk to your doctor before starting any home based health remedy.
According to their website, each Drip Drop package contains:
[table id=1 /]
I’ll be judging Drip Drop from the perspective of casual long-term home user. I’ll assess the drink on taste, effectiveness and cost.
On a normal day I’ll drink at least 4 liters (approx. 1 gallon) of water and tea compared to the two liters (1/2 gallon) recommended for most people. When I exercise heavily I’ll drink up to 6 liters of water (approx 1.6 gallons).
Note: if your urine is too dark, you’re not drinking enough water.
So I emailed Drip Drop and Kelsey offered to send me some samples. The company is small enough that the correspondence is personal and not a form letter. Thanks Kelsey! Within a few days I received a box from Utah (even though they’re based in San Francisco) containing two boxes of Drip Drop, in both Lemon and Berry Flavor. 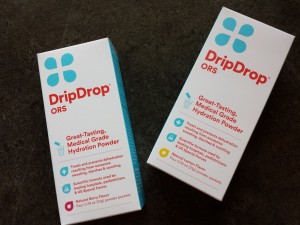 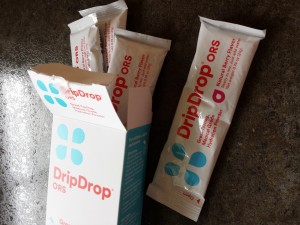 Each package is designed to be mixed with 500ml of water. So I stirred the Berry with cold water. It eventually mixed in but it still had some undissolved bits at the bottom. Note: I measured the water and Drip Drop in another container before pouring most of it into this glass to finish stirring. 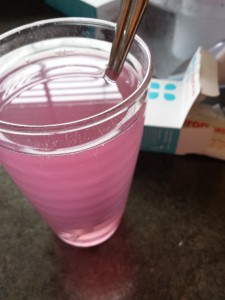 The remainder went to the closest guinea pig who, as a nurse, could appreciate the need for a properly formulated Oral Rehydration Therapy drink. Some people approximate these drinks by adding salt and sugar to water, but that gets old fast if you’re planning on a long-term solution.
It was much better than I expected! I immediately chugged half of the glass after the first sip. You can only marginally taste the sodium, otherwise it’s got a good taste profile. Not too watery, not too strong. I feel confident that it’s light enough that I could spill it on me and I wouldn’t feel sticky for days. The mix will stay stable for eight hours, or for 24 hours if refrigerated. So I put the glass in the fridge to have later. 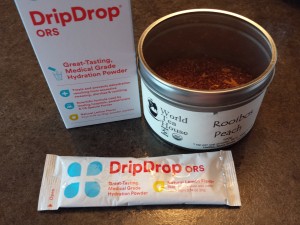 Since their site indicated that Drip Drop can also be consumed hot, I turned on the kettle and picked out a decaffeinated Roobios Peach Tea from the World Tea House in Halifax, Canada. Caffeine is a very mild diuretic and generally won’t dehydrate a healthy person, but I drink enough water in a week to do a load of laundry, so I appreciate variety.
This time I cut open the package to only use half. At first I was annoyed that I had to get scissors… 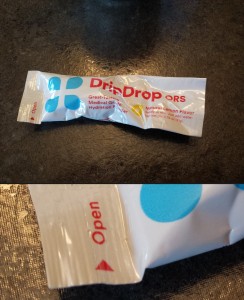 It’s probably a lot easier to store if you open it correctly. I don’t know how long the powder will store once opened.
The powder dissolved immediately, and it was delicious. While the Berry Powder/Cold Water mix left some gumminess in my mouth after drinking it, the Lemon Powder/Hot Tea combination made the Drip Drop undetectable. I brewed 500ml of tea as if I were drinking it at normal strength, and added enough powder as indicated for 250ml of water. I’m not sure if I threw off the proper balance. The instructions don’t warn you whether diluting the product ruins effectiveness. It probably does.
After a few hours, I felt a little thirsty so I drank the rest of the refrigerated Berry Powder/Cold Water combo. It didn’t settle back into powder even in the fridge.
I started this experiment in the mid-afternoon and have had 1000ml of water and tea, and one and a half packages of Drip Drop. I don’t feel thirsty at all. Tallying up my water intake at the end of the day, I figure I’ve had 1-2 liters less than my usual 4 liters. Four liters of water a day in a year is 1460 liters (385 gallons). If I were able to get by on 2 liters a day like a normal person, I would only need 730 liters (160 gallons) of water. At 4L a flush, that’s approximately 182 fewer flushes on a low-flow toilet in the span of a year.
I’m a little iffy on the cost of the actual product, though. A single box with four packet retails for $9.99 USD. Or, you can purchase 24 boxes at $215.78 and get 96 packages. The single box works out to about $2.50 per packet, and the bulk deal is at about $2.25 per packet. It would be nice to have a middle-of-the-road option, or a split package containing 6 Berry Flavor and 6 Lemon Flavor. Considering the cost I’d be more likely use the product for long fitness classes or for when I’m performing on stage in my other job as a dancer.
In conclusion, Drip Drop Oral Rehydration System is both effective and delicious, if at a cost. I normally don’t consider the impact of the extra water it takes to keep me alive, but if I lived with a scarce water supply I might be concerned about the environmental impact of hundreds of liters of “wasted” water and be more likely to use Drip Drops to lessen usage. As a casual user who could benefit from daily use, I’ll probably consider purchasing these in bulk expressly to drink when I usually exercise 2-3 times a week. But at 3x weekly use, purchasing in bulk, the cost would still be $350 annually, not including shipping to where I’m at in sunny Canada.
If you want to request some samples for yourself, visit DripDrop.com and tell them Margaret sent ya.

Rape Facts and Falsehoods By James D. Agresti Abstract In this era of #MeToo and rampant sexual assault allegations, many media outlets, politicians, and scholars...