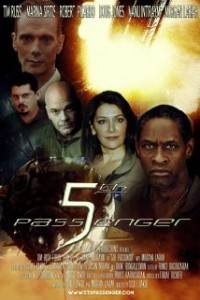 “Wow! That sounds like a Philip K Dick story!”
I didn’t realize that I was talking to Morgan Lariah (@MorganLariah), one of the co-writers who together with Scotty Baker had written the script for The 5th Passenger. The film is billed as a sci-fi horror whose crew deserves as much recognition as the household-name scifi actors they’ve brought on board.
At first glance I figured Lariah was one of the film’s actresses. Oops. At Comikaze it’s easy to misjudge a beautiful woman on the floor, but it turned out that Lariah is an award-winning screenwriter on top of her acting career. She and the equally beautiful (and secretly Canadian — that made two of us in the whole building!) Ryan T. Husk (@Incredible_Husk) were enthusiastically handing out promotional material when I met them on the last day of the convention held annually in Los Angeles. Modern Trekkies will recognize Husk’s career from fantastic fan productions like Star Trek Futures, Prelude to Axanar, Star Trek Continues all the way to J.J. Abram’s Star Trek (2009).
From 5thPassenger.com:

Set in 2151, after the Yellowstone Caldera volcano erupts throwing the Earth into chaos, 5th Passenger tells the story of a secretly pregnant female officer and her four man crew adrift in deep space in an escape pod after their transport ship explodes before reaching the new home planet. They fight amongst themselves as they run low on air, but must work together to find a vicious alien hiding aboard their craft before it kills them all.

According to their twitter feed, the 5th Passenger has officially finished their three weeks of principle photography and are just cleaning up after their wrap party. Their Kickstarter was successfully funded at 125% of their goal with 797 backers in November of last year.
The 5th Passenger is moving on to post-production and along with Morgan Lariah and Ryan T Husk, it stars Tim Russ, Marina Sirtis, Doug Jones, Armin Shimerman, David Lim, Manu Intiraymi and Hana Hatae.
IMDB: The 5th Passenger
Official Site: 5thPassenger.com
Official Twitter: @5thPassenger