The Airing of the Grievances

Festivus may have already come and gone, but the Caotica staff are a ornery bunch who believe we have the right to complain 24/7. We were pretty gosh-darned disappointed by 2014 here at Caotica, we have to say. We still have strength, so in the last hours of the year we’re going to air some of our grievances.
Here’s the official Caotica list of things that we need destroyed before we begin 2015. 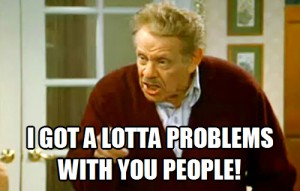 Well, that about covers it for the year. Happy new year, everybody! Did we miss any grievances? Let us know in the comments and we’ll rage against them in 2015.

Tonight (Thursday, October 27th) EVENT magazine will be hosting an evening of prose and poetry, showcasing the work of four indigenous writers.