Did you know about Wallace?

Well …
There was William Wallace, he who refused to submit to English rule and in 1305 was hanged, disemboweled, and quartered for it. Makes you think twice about secession, I guess that’s after the fact though.
How about Wallace of Wallace and Gromit? The Wensleydale cheese loving star of four British clay animation short films, the first of which ‘A Grand Day Out’ was nominated for an Academy Award (the three following did win Academy Awards)

But for now, the rig count: 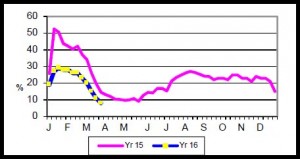 [table id=23/]
And finally, last but not least
Wallace Broeker, why him? In the August 8, 1975 edition of Science he penned the article “Climatic Change: Are We on the Brink of Global Warming?
And so it began.
Sciencing Out The Options