Did you know about the man?

Sugar Man refers to a fellow in a song sung by Sixto Rodriguez. The documentary about Sixto “Searching for Sugar Man” won an Academy Award in 2013.
Kahneman is Daniel Kahneman, 2002 Nobel Prize winner in Economics. His bestselling book “Thinking Fast and Slow” addresses human behavior.

But for now, the rig count: 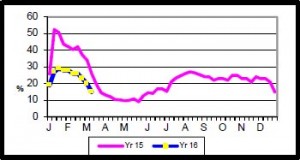 And finally the gas man, the guy that used to come to our house and read the gas meter. In Alberta where natural gas is the principal source of energy in households (72% according to Stats Canada) he (or she) would have been a familiar figure.
Metering and Measuring Success