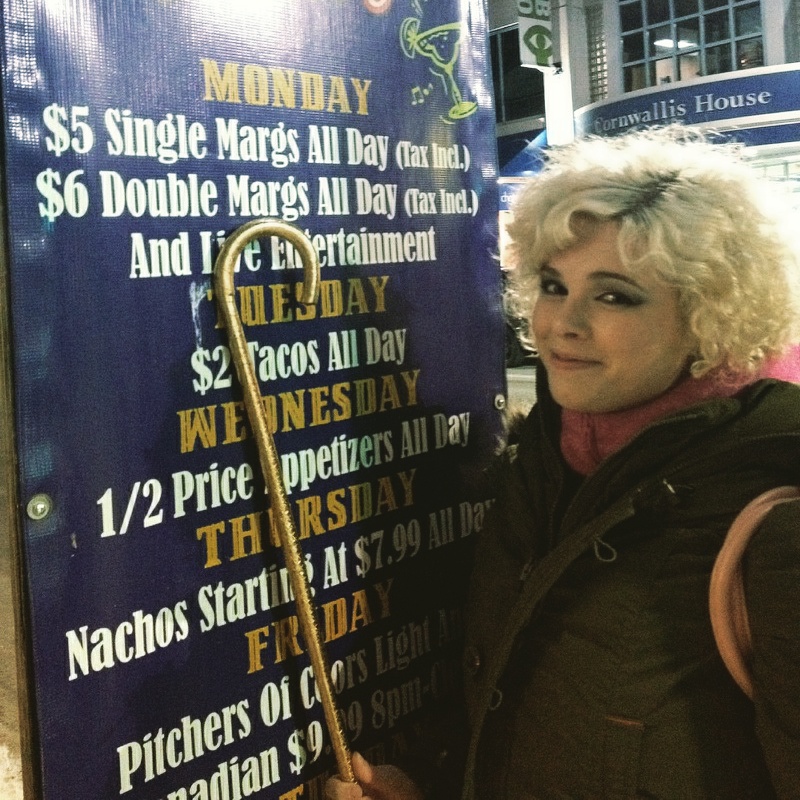 Author Margaret is too sober for love. Single Margs: $5. Photo by Laura Selenzi. Via @margaretsbelly instagram.

Let my collect my eyeballs off the floor ’cause they just rolled out of my head. What idiot named and branded this show?
Among the ten contestants, the hideous deformations include:
Alopecia, missing limbs, severe burns, hyperhidrosis, ostomies and scarring.
I’m going to focus on the ostomy part, because I have one. There are two ostomates here, one with ulcerative colitis and the other with Crohn’s Disease. These are the two main divisions of Inflammatory Bowel Disease (IBD). IBD is incurable and life-long and is often managed through surgery.
Just like Antony from Liverpool, England, I too have ulcerative colitis and was fitted with an ostomy bag in 2013 after having my colon removed. I don’t recommend getting your colon removed unless your colon is trying very, very hard to kill you.
I’m a huge chatterbox about the emotional wave of diagnosis and surgery and am very open about what it’s like to have your life collapse underneath your feet. After my colon was removed (in a process called a colectomy), my small intestine was brought out through my abdominal muscle to create an ileostomy. From there, you need to wear an ostomy pouching system all day every day to collect waste. This was especially devastating because I was a bellydancer.
Unbefitting the stupid branding on the show, I decided to embrace my ostomy from day one even when I initially both hated and couldn’t comprehend my new look. It didn’t help that I had lost a pile of weight in the hospital. It didn’t help that all of my hair fell out from the shock, steroids and malnutrition. But it’s been over a year since my surgery and I feel fantastic. I’m still a bellydancer, too. Boo-yah. Haters gonna hate, and dancers gonna dance.

Margaret posing with a Coloplast rep at an ostomy education day, October 2014 in Nanaimo BC. Via @margaretsbelly instagram.

When it comes to having an ostomy, almost nobody cares. Really. If “having an ostomy” is a problem in a relationship, it’s their problem. This is two-fold: The other person may leave you out of frustration from having to “deal” with your illness and ostomy. Or they may not want to get involved in the first place because they are too avoidant to meet the issue head-on regardless of the kind of person you are.
One of my GI docs, an older fellow gave me the fiercest You Go Girl! pep talk I’ve ever heard about relationships: “If an ostomy is an issue for him, then he’s not worth your time anyway.”
In terms of my ostomy I’ve decided to land on my feet. I got back into bellydancing the second I finally found an ostomy bag brand that could work with the movements required. My dance troupe at Serpentine Studios is changing some of our costuming partly so that I can dance with them again.
It’s a nice sentiment to insist that a disability or illness doesn’t define you but it’s not true. A century ago I would’ve been dead. As medical technology advances, people will survive stranger and stranger circumstances. Marshall McLuhan wrote that convalescence is new. My experiences are relatively new. If you feel that you are Too Ugly for Love, you’re probably just too insecure for love.
Please note that one of the participants, Marcia, has posted a response to the title of the show on the Crohn’s and Colitis UK facebook group.

Rape Facts and Falsehoods By James D. Agresti Abstract In this era of #MeToo and rampant sexual assault allegations, many media outlets, politicians, and scholars...