Three TV obsessed writers and friends with wildly different tastes join forces to discuss, dissect, defend and destroy television series they’ve only seen TWO episodes of – the PILOT and the FINALE. The missing plot points (donut holes) are then puzzled out using their extensive and excessive TV knowledge. Shows are selected semi-randomly.

“A philandering billionaire playboy who moonlights as the superhero, Awesome X, faces against his greatest adversary, Killface, but finds balancing his business and superhero lives difficult.” 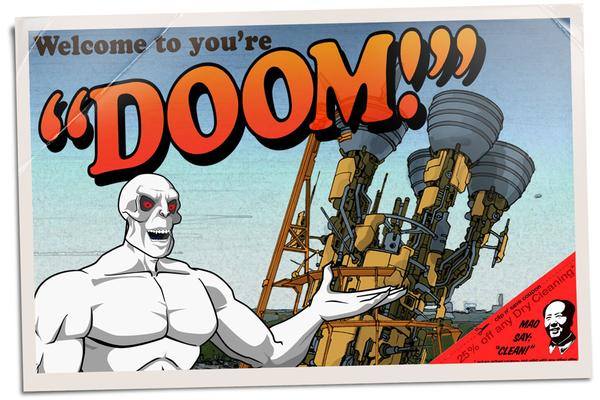 A sad, sad waste of an ad budget.

IMDB’s quick synopsis for this absurdist late-night comedy is accurate, but misleading. The hero and villain are quickly established so that the show may dispense with any standard expectations of the hero/villain dynamic. Despite each character labelling themselves as expected by superhero conventions (doom-cannons, super-teams, etc) and the character’s own incessant external-internal monologues, final identification of true hero and villain is left to the audience.
That being said, it’s hard to accept Xander as anything other than a self-centered ass. When we’re introduced to him, his latest battle with super-villainy has destroyed the town he purports to protect. A clear clue that he’s not the hero he claims, or the hero he thinks he is. It’s also a good clue that heroes may not exist in this world.
There’s the real discrepancy with the synopsis: the focus isn’t on Xander Crews. Killface as a character easily stands equal in stature to Xander Crews, and he’s much more sympathetic to boot. Killface has a son he cares deeply about, the ability to feel emotions beyond Xander’s trademark arrogant irritation, and a sense of responsibility that Xander Crews would find impossible to live with given his short attention span. And to top it all off, we spend the entire first episode focused entirely on Killface. We don’t even meet X.C.!
Not that this guarantees Killface is our protagonist. This is an ensemble cast, centered around the Xander/Killface dichotomy, whatever their roles and archetypes may actually be. As is common with comic book adversaries, they’re far more alike than either would like to admit, and could easily be best friends in a different world. They’re both violent, bumbling, easily distracted by trivial thoughts, and far luckier than either deserves.
Now, saying Killface is a good person is a facile argument. He built an enormous rocket to propel the earth into the sun (possibly), or at the very least blackmail humanity into his control (definitely). The second season ender suggests he either could’ve accomplished his goal of world domination sooner, or is an imbecile given a relatively simple task.
But this isn’t a universe that rewards good characters. There aren’t any characters on Frisky Dingo who come across as a “good” or moral person. In the end everyone either is, or becomes, a confused villain. Each character is looking out for their own esoteric and, let’s face it, downright bizarre interests.  Stan wants to take over the company. Grace Ryan is looking to get impregnated by Xander. Ronnie just wants to make love to Xander’s face. Nobody can understand Simon enough to figure out what he wants, but you know it’s not good.
Much like the world Reed establishes in Sealab 2021 and Archer, these are universes filled with arrogant, incompetent people who have no business working in their industry. Whether it’s the spy game, the superhero game, or the underwater super-scientist game, these people are just holes into which money vanishes. They bring down everyone around them in an extremely casual and disaffected way, and that’s why it’s so absolutely hilarious watching them fail.
All three members of the DONUT CREW recommend FRISKY DINGO, and we had a real wing-ding of a time discussing it. Enjoy. 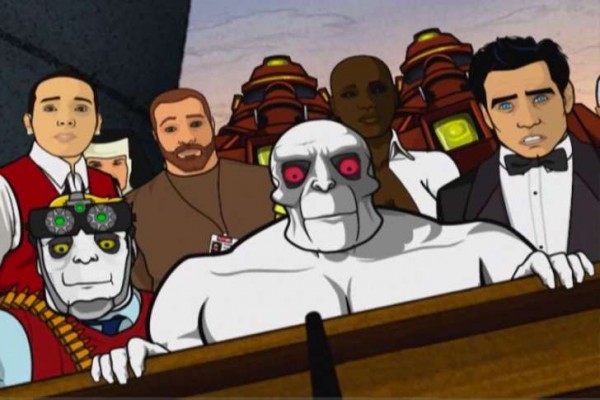