A Message To You: Chapter 1 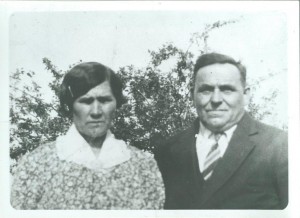 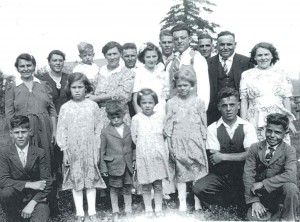 We were living in a small house, 24 by 24 feet, only four bedrooms, we were quite crowded. It was a good thing when the older boys started to work. At the age of 14 and 15 years old they moved out. It made more room for the rest of the family.
My brother Raymond told me that he made me walk when I was seven months old; I was the youngest to walk that early. I think that because I am more hip than the rest of them. When we were old enough, when the baby was crying we had to rock the cradle that was our job. I remember rocking the cradle and I didn’t like that too much, but we had to do it anyway. One good thing: it would give us a break.
As I got older the job got bigger. I started to milk cows when I was seven years old. We had a jersey cow, she was very gentle, but her teats were a bit too big for my hands, but I managed to milk her anyway. We had to do that morning and night, we had 4 cows, and the older boys were doing it most of the time. 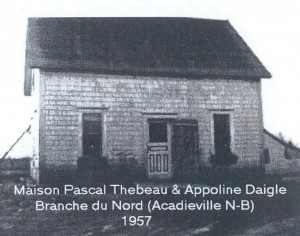 When the milking was done, we had to separate the cream from the milk, we had a machine that was called a separator, it had a bowl on top we would put the milk in, and it had a valve to hold the milk in the bowl. It would hold four or five gallons of milk, to do that we had to crank the machine.
It had a bell attached to the crank. When we first start to crank the machine, it would ring every turn, it was hard to turn the machine at the beginning because that bowl was very heavy. It was made like a funnel, it would come apart, it had 10 pieces of metal, they had holes in them so the milk and the cream would come out of the holes. There was a cover to hold the pieces together with a nut, we would put the bowl on the machine it had a special shaft that would turn the bowl.
There were two deferent outlets, one for the milk and one for the cream set on top of one another, the milk would come out from the top and the cream would come out the bottom. Because the cream is heavier than the milk in the bowl, it started to crank slowly, we had to turn it fast enough so the bell would stop ringing and that would tell us that the machine was turning fast enough, then we would open the valve to let the milk go into the bowl to separate the cream from the milk, this had to be done twice a day.
The bowl had to turn quite fast: we had to turn that machine five or ten minutes, depending on how much milk we had to separate. That was part of the chores we had to do, we would keep the cream five or six days so that the cream would get old, six days later we would make butter. We would put the cream in a container the shape of a barrel and had a steel shaft that was bolted on each side of the barrel that was mounted on a frame so we could move it back and forth and by doing that it would splash the cream and it would depend how old the cream was it would take up to a half an hour before it would turn to butter and the butter milk you could drink. One batch would make about seven pounds of butter.
A few years ago, me and a friend went to teach a session in Bathurst, New Brunswick. On the way back we were talking about different things and I said to him, when I get home, I was going to make some butter, and he said, how do you make that? I said to him, you don’t know how butter is made! He said to me ‘no I don’t know how butter is made’, so I explained to him how butter was made. So he said butter is made with cow’s milk. I thought it would be good to explain how butter was made.

This button at the bottom of the page makes that it easy to buy my book, and if you do buy one, I thank you for helping my dream come true.  If you would like an autographed copy, let me know!